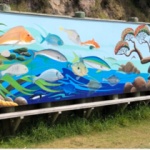 Great Barrier Island (Aotea Island) is one of New Zealand’s largest islands and is the barrier that makes the Hauraki Gulf a sheltered paradise.

Known Locally as The Barrier it’s eastern side faces the Pacific and in Easterly conditions the only bolt hole is The Cove on Rakitu or Arid Island that lies just offshore towards the northern end of The Barrier adjacent Whangapoua beach. The Island is owned by DoC (Department of Conservation) but is still run as a farm. There are a couple of great walks here but the rangers ask that you leave gates as you found them and carry any rubbish out with you.

In Westerly conditions in settled weather the East Coast of the The Barrier is Fabulous with numerous white sandy beaches and secluded coves. The fishing is awesome and if your passion is diving Cray’s can be found on almost every rocky headland. Expect some thermocline with visibility improving with depth.

The guide shows the anchorages as day or fair-weather anchorage and care should be taken to keep a close eye on the weather while exploring this coast. Apart from the Cove anchorage, it’s a long way around  either the northern tip of The Barrier at the Needles or the Southern coast at Cape Barrier and both options bring a difficult passage to the west if conditions deteriorate.

On the opposite side of the island the West Coast of The Barrier is different in many ways, topography shelter, access to supplies and places to get ashore without having to brave the surf.

The hub on this coast is of course Port Fitzroy. The southern entrance to this land locked harbour is an experience. Man O War Passage or Governor Pass is very narrow at just 50m wide and can see strong tide flows but once inside, opens to a well protected harbour with numerous anchorages and quiet coves. Like most of New Zealand’s Northland Coast The Barrier is going to be busy over the Christmas breaks and Summer holiday weekends but outside these times an anchorage to yourself is not hard to find. 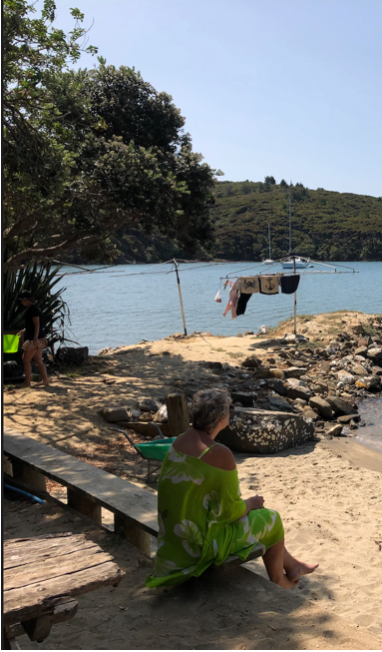 A favourite spot in Fitzroy is Smokehouse Bay where the land owner has provided facilities for cruisers. You can smoke fish, have a hot bath, wash and dry cloths and cook a Pizza in the wood fired oven. It’s a great place to meet and have some fun with friends after a day out on the water. Another is Forestry Bay at the southern end of Unguna or Rarohara Bay. This bay serves as the start point for many of the great walks and hikes that The Barrier is known for. There’s everything from   half hour walks to full day hikes and there’s even the option on some of the longer walks to book a stop at one of the DoC huts. One of my favourites is the walk through Glenfern Reserve. This is situated at the head of Rarohara Bay opposite Fitzroy Wharf and is accessed either from the landing on the western side of the bay or from the main Fitzroy road with a turnoff approx 500m up the road from the Fitzroy Store. The walk takes you through native forest with well documented information as you head towards the ridge where one of the massive Kauri Trees sports a swing bridge to a Tree House lookout over the valley. The track then takes you to Bozaids Lookout which has a 270 degree view of Port Fitzroy harbour and around to Port Abercrombie. This walk takes about an hour, stop off at the Ranger Station on the way out to learn more about the area.

From Katherine Bay in the North, Through Port Aberchrombie and Nagel Cove, Fitzroy harbour, the Broken Islands and onto Whangaparapara, Blind Bay and Tryphena there’s so much to see and do you’ll need to come back again and again.

Over at Port Fitzroy at head of Rarohara Bay you’ll find the main wharf. There’s Fuel (Petrol and Diesel) and water available on the wharf as

Mural on the Wharf at Port Fitzroy.

well as bait and ice. On the landing is a Dive Fill station and usually in busy periods a good hamburger bar. Just up the road is the Port Fitzroy Store that has good stocks and has a Bottle Shop with a good selection of Wine Beer and Spirits.

Further down the Coast at Whangaparapara fuel is again available on the wharf, this can be hard to get onto if there is a strong S - SW wind blowing, the wharf also has a dinghy dock attached. Take a two minute walk along the road to the Whangaparapara Lodge, they have a small shop and bar and restaurant. We have enjoyed their Friday evening happy hour and a meal on occasion, excellent!

At Tryphena fuel is available ashore at the local service station, there is a store, Post Office and transport available. The main airport is at Claris on the east side of the island and with many new dwellings going up around the Medlands area there is more shopping at Claris township.

Another great way to see and experience The Barrier is by Trailer Boat. There are 6 all tide ramps on the west coast and one sand ramp at Medlands Beach on the east coast(all detailed in the Activites tab on the Guide). Roads on the barrier are generally tight and winding gravel with some areas of seal only found around built up areas. For info on getting to The Barrier with car and trailer check with Sea Link for timetables.

GETTING TOO & FROM THE BARRIER.

If you’re heading south down the Northland Coast and the weather suits (a light to moderate SW breeze is ideal) then departure from either Tutukaka (50nm) or Whangarei heads (40nm) it’s an easy run to the Barrier.

From Tutukaka you’ll pass close the Mokohinau Islands which make a picturesque stop on the way. The group is mostly nature reserve and landing is prohibited but landing on the northernmost island, Burgess Island is allowed at Landing Bay, one of the best anchorages and a walk to the light is fun with a great view as reward.

Departure from Whangarei Heads, just that little further south, takes you through the Hen and Chicken Group of islands just 8nm off the heads and then a clear run to Fitzroy. The same applies in reverse if heading north from the Barrier.

From the southern end, the most common trip across to the Barrier is from Kawau Island. A short east west run of 25nm takes you from North Channel Kawau south of Little Barrier to the Grey Islands just out from Fitzroy Harbour with one obstruction on route. Approx 7nm ESE of the Greys in the Cradock Channel lies Horn Rock. This obstruction is marked with Virtual Object AIS Markeron it’s south eastern corner. The patch of rough ground ranging from 6.8m to 11.2m covers an area of several hectares with Horn Rock breaking the surface at low tide 250m NW of the virtual beacon. It’s a great spot to stop for a fish or if a cray is your wish this is a perfect spot. Care is needed here as tidal streams exceed 1.5kn on both ebb and flow and any swell can make the area treacherous.

Exploring the coast south of Fitzroy also opens up the Coromandel area and the “Bottom End” of Waiheke island as an alternate route to or from the inner Hauraki Gulf.